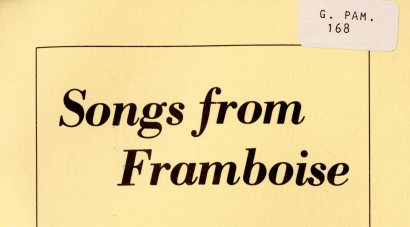 We are currently working with the team at DASG to develop a fully searchable database to house the songs we have catalogued as part of the Language in Lyrics project (more on that here). In the meantime, we are releasing a spreadsheet of song metadata every week on Google Sheets which we hope will be useful until the full database is ready. These are still works-in-progress and we encourage you to leave feedback through the comments function on Google Sheets!

The third in this series is Songs from Framboise, a collection of the poems of Dan Alex MacDonald of North Framboise. (You can view information on all the indexes we have released so far here.)

This sweetly illustrated publication was a collective effort between Dan Alex’s daughter Eunice Lively, his brother Neil MacDonald, editors Kay MacDonald and Effie Rankin and a number of other supporters.

Index of song metadata available on Google Sheets via Language in Lyrics.

Dan Alex MacDonald was born in North Framboise.  His mother, Annie Munroe hailed from Canoe Lake in Cape Breton County but both of his parents were descendants of immigrants from North Uist.  Dan Alex worked as a farmer in Framboise and also operated a sawmill.  He raised a family of three boys, three girls and a foster son.

Dan Alex’s poetry deals with a number of common themes explored by many 20th century Nova Scotia bards, not least of which is the changing scene of rural Cape Breton.  While growing up in Framboise certainly had its share of difficulty, MacDonald recalls fondly the simplicity and security of his youth.  He praises the Gaelic cultural observances that punctuated the year and united the community.  Also present in his compositions is his faith and participation in the local Protestant church.  Probably his best known and widely sung composition would be Òran do Cheap Breatainn, or ‘S e Ceap Breatainn Tìr Mo Ghràidh as it is also known.  The song is an ambitious 14-verse praise of Gaelic Cape Breton and the lifestyle he enjoyed in his youth.

Dan Alex was prolific as a bard in Framboise, an area that was well known for such bards as James R. Morrison, his uncle, Murdoch Morrison and Kenneth A. Fergusson of nearby L’Ardoise Highlands.  The area also could also boast many great Gaelic singers who possessed a distinct style of singing reminiscent of that which could be heard in their ancestral home of Berneray, Harris.  The locals appear to have had a wide knowledge of the bardic tradition as evidenced in such recordings as those featured in the Framboise native DJ MacDermaid’s collection, housed at the Beaton Institute (MG 21.8).

Other than Songs from Framboise, many of Dan Alex MacDonald’s songs are published in Beyond the Hebrides (Fergusson, 1977) and Gaelic Songs in Nova Scotia (Creighton, 1964).  Further unpublished materials may be found in a fonds bearing his name at the Beaton Institute (MG 6.35).

View all posts by languageinlyrics